Skip to navigation Skip to content Skip to footer

Energy customers pay the price for the collapse of energy companies

British energy customers are facing a potential bill of £172 million from the collapse of 10 domestic energy suppliers since January 2018. On top of this, thousands of people who owed money to failed suppliers lost out on consumer protections and faced aggressive debt collection as a result, according to a new report - Picking up the Pieces - by Citizens Advice.

Energy suppliers pay a number of industry bills, these cover things including renewable generation, infrastructure costs and metering costs. The charity’s research shows that £172 million in unpaid industry bills was left behind by failed suppliers, which will likely be paid by consumers through their bills.

Citizens Advice also estimates that at least 32,000 have been left open to potentially aggressive debt collection practices by the administrators who took over these companies.

When energy suppliers fail, Ofgem’s Supplier of Last Resort (SoLR) process appoints a new supplier for customers to ensure a continued energy supply, while the old supplier is taken over by administrators.

Administrators are not bound by the same rules as suppliers licensed by Ofgem. This means they can pursue debts much more aggressively than usually allowed and customers can see the amounts they are being chased for go up overnight.

This leads to people, including those in vulnerable circumstances, being contacted by debt collectors and asked for sums they can’t afford at very short notice.

This can cause serious stress and anxiety for those caught in this situation. Since January 2018, Citizens Advice has helped over a thousand people with debt issues related to failed suppliers, with average debts of £250. 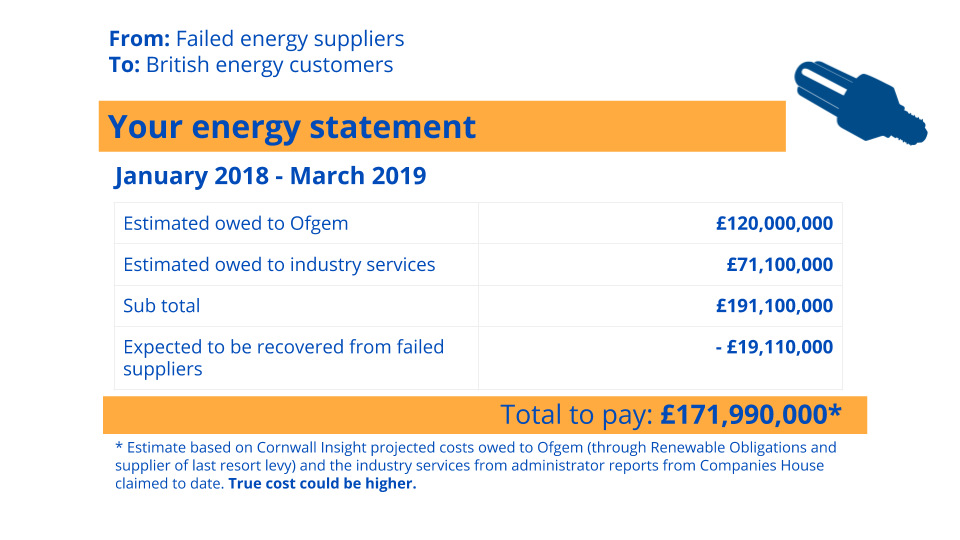 An elderly person helped by Citizens Advice had agreed to pay £10 monthly towards their debt, following a decision from the Energy Ombudsman.

After their supplier failed, the administrators requested the full amount of nearly £350 and threatened to bring in bailiffs. The customer didn’t understand what had happened and was left feeling distressed and anxious.

The charity is calling on the government to use the forthcoming Energy White Paper to fix the protection gap for customers who owe money to energy suppliers when they collapse.

It wants the government to take action to make sure administrators of all energy companies have a duty to consider consumer interests and follow the same rules as suppliers.

It is also calling for legislation to ensure more regular payment of industry costs - in particular the Renewables Obligation (RO) - by suppliers, to stop the build up of big debts that are then paid by consumers.

“Consumers shouldn't have to foot the multi-million pound bill left behind when companies collapse - and they certainly shouldn’t lose their usual protections in the process.

“The Energy White Paper is the perfect opportunity for the government to close the gap in protections and limit the cost to consumers of any future supplier failures. It must act now.”

Your feedback helps us make our digital services better. Give us feedback